A reader forward me CHRONIC FATIGUE SYNDROME (C.F.S.) IN A FAMILY OF DOGS,

DIAGNOSIS AND TREATMENT OF 3 CASES First Published in Vet On-Line August 21 2000.  The probable cause was two vancomycin-resistant strains of Staphylococcus xilosus, The treatment was with thiacetarsamide sodium, an organic trivalent arsenical given intravenously in low dosages (0.1/mlk/Kg/day) for 3 days.

Staphylococcus aureus appears to be maintainer of CFS, see this earlier post. The vaccine against this almost eliminates CFS for a period of time, see a forgotten treatment post and can cause a low SED rate. 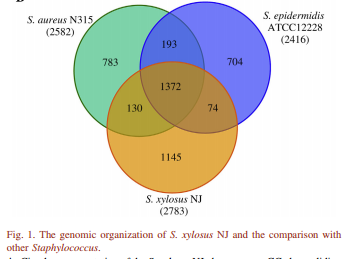 Above you see how closely they are related in terms of genomic data, “Their differences mainly exist in genes associated with virulence and pathogenicity, such as adhesins, superantigens, resistance to antibiotics, capsular polysaccharide synthesis enzymes, pathogenicity islands, quorum sensing and biofilm formation. This study can help reveal how commensal S. xylosus strains evolved into invasive strains.”  [2015]

There are no studies for detecting in CFS/IBS/FM patients, however, there was a study dealing with cat bites and humans…

” Samples were collected from 200 clinically healthy cats and processed by standard bacteriological methods and tested for susceptibility to a panel of 16 antimicrobials. A total of 212 staphylococci isolates were obtained from 141 of the 200 cats (70.5%), and more than one colony was recognized in 53 cases. Coagulase-negative species were most frequently found (89.6%) distributed among Staphylococcus xylosus (50.9%), Staphylococcus felis (27.4%), Staphylococcus simulans (6.1%) and Staphylococcussciuri (5.2%). Coagulase-positive species (10.4%) were distributed among Staphylococcus aureus (4.7%) and Staphylococcus intermedius group (SIG) (5.7%). Regarding to antimicrobial resistance, 178 isolates (83.9%) were resistant to at least one antimicrobial, and rifampicin showed the best results with 100% of sensitive strains. Conversely, high rates of resistance were observed for penicillin and tetracycline (56.1%). The 212 staphylococci isolates and 30 (14.1%) strains were resistant to methicillin (on the disc susceptibility test) and may be preliminarily considered as methicilin-resistant staphylococci. In conclusion, this study reports important rates of antimicrobial resistance among the species of Staphylococcusisolated from clinical specimens of cats, which must be considered for the treating of cats’ bites in humans” [2013]

Note: a cat (or dog) licking a hand or a face could easily transfer these bacteria to humans.

This present an interesting line of investigation that begs a researcher to do a study of the staphylococci species (and strains) in CFS patients. These bacteria are found in the oral microbiome (mouth bacteria) which may easily transit to the gut. As I have stated before, this family of bacteria is very hard to treat because it easily develop resistance to an antibiotic (which is why rotation of antibiotics is likely the best course).

In 2001, The National Forum indicates studies were on going but their results were never published (or completed???) “The National CFIDS Foundation has funded in-vitro testing of arsenic trioxide.  We hope to be able to report results to you in a future Forum”

A 2007, forum post “.Micrococci bacteria, that cause CFS/ME. Antibiotics have not eradicated this condition, but Arsenic treatment has, both in Dr Tarello and his wife, plus patients at the clinic in Denmark.”