I just got back my second uBiome result. I took the first in December and it indicated very high bifidobacteria and bilophila with lactobacillus and many others being very low. I followed my recommendations religiously, having eaten almost nothing I haven’t prepared myself since getting my recommendations in January (mostly curries and vegetable dishes high in fat since fats were highly recommended, especially saturated).
In terms of fatigue, I began feeling better almost instantly since a lot of the foods I was eating were contributing to my overgrowths and I have seen slow but steady improvement on this front since. To put it in perspective, the fatigue was so bad in December I had fallen into deep depression and was feeling truly hopeless for the first time since becoming ill. I’m a long way from that place now (though far from being healthy) and am on the cusp of looking for writing work I can do from home. Thank you so much for this.
My new April uBiome shows that my adherence has paid off as I appear to have wiped out my overgrowths, or so a quick glance would suggest. My problem now, however, is that my recommendation list is empty for my newly uploaded results unless I switch to “some evidence” under “restrict to items with”. I was hoping you might have some broad suggestions in terms of where to go from here. In addition, I want to ask if you would dive into my changes. I’ve attached my .json files below. #### is the older one, from December 9th 2017 and ###### is the new one from April 10.
Thank you again for the work you’re doing on your site. I’d be grateful for any insight you can offer. “

At a high level, we see metabolism has moved closer to normal but concerning:

despite the subject report of improvement.  Symptom reporting tend to be unreliable because if a few symptoms dominate in severity, less symptoms may be reported When Symptoms are less severe, more may be noticed.

The only symptom that showed significant improvement was ADHD, a proxy for the ability to focus (which agrees with feeling good enough cognitively to seek writing work).

A followup email potentially explained what is happening.

“I stopped taking almost anything that wasn’t on my take list, especially vitamin d because I remember seeing it promoted bifidobacteria. I took melatonin and valerian throughout purely to help me sleep, a lot of monolaurin as it was a recommendation and for possible antiviral benefits, and curcumin (if I stop taking it I get really bad lower back pain). I took Lactobacillus gasseri for two weeks (made me feel great while taking it) and symbioflor 2 for 1 week which also made me feel better but less so.

I started taking niacin after the latest ubiome and it stopped my diarrhea for about 2 weeks, which has never happened before, and came with severe flushing.
When I took my December ubiome I was at a full 10, definitely worst cfs I’ve had. In April I was more like a 5 (and probably around 3 when I took the l gasseri in March.)”
This is the second uBiome comparison that I have seen worst profiles (I will be posting the other one shortly). BOTH had the same issue — stop taking everything on the general support list and keep only to the take/avoid list.
At the bottom of the recommendations/ suggestions, I stated:

Clearly I need to SHOUT THIS OUT — especially for the brain-fogged and distracted CFS reader.

#2 For dealing with HIGH counts — there was nothing on the default recommendations. When I changed to LOW counts,  a lot of things appeared.  (Remember — the original recommendations ONLY dealt with High counts, the site has evolved from there). 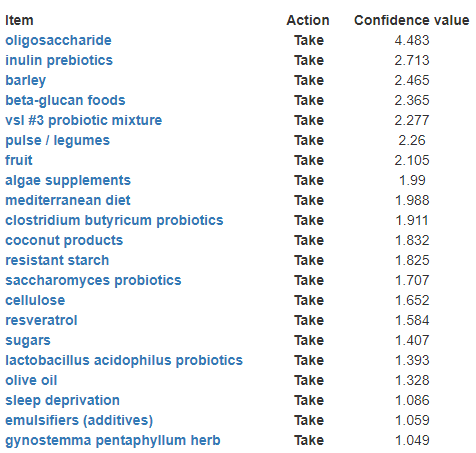 As a result of this, I modified my profile summary page to report high and low separately, as shown below:

Clearly, most of the change was due to more bacteria dropping below normal, almost a 35% increase in low counts.

I am trying not to do this (time consuming and only benefits one person), but in this case it may be of general benefit.  The settings I used was LOW COUNTS, not aggregated, some evidence; then it’s common sense or remember this or that odd fact from reading.

Remember — you should NOT view this as a “You must do everything on this list”, these are suggestions of modification you should do (keeping the core supplements unless there are explicitly excluded — like Vitamin D).
I have explicitly added the two soil based organism (which were not on the list) — Prescript Assist and Equilibrium. We are dealing with low counts across the autoimmune  board, and this ‘feels’ like a good way to address it.

The earlier recommendation targeted at high counts only, appear to have worked based on two pieces of evidence:

We are now moving over to repopulating the low counts. Once that is done, we may find that another adjustment is needed. It is not a one-step linear path to rebalance the microbiome.