Most CFS uBiomes show high diversity — but CFS can be a progressive condition which would imply that the uBiome can change it’s profile over time.

Conclusion: Every basic criteria is a match. The low diversity is not typical but has been seen in some other uBiomes. 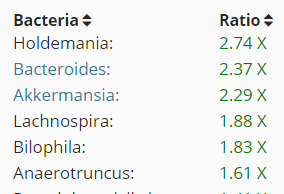 Analysis of Over Growth

Items below appear on both inhibits and enhances — so a toss up!

My first question was why was there low diversity, there is no report of taking antibiotics? A good night sleep revealed the probable cause – because the right probiotic to reduce the high diversity was taken. The one that I suspect most as being the cause was:

Wish List: Some patient with high diversity in uBiome try Lactobacillus Fermentum for 4-6 weeks and then get another uBiome done. This will provide some evidence if the above speculation is correct. If it is, then we may have discovered a key probiotic for remission.

Usually I have seen clustering (multiples) of some items across the bacteria genus. In this case, there is little, what there is:

One interpretation of the lack of clustering in the overgrowth is that the microbiome is moving towards normal. The highest overgrowth is just 2.74x well below most CFS uBiome results.

I suspect that the sleepiness is a form of herx. RegActiv (Lactobacillus Fermentum) produced strong antibiotics and does Mutaflor. If there is an opportunity to take a week+ off from work for a ‘sleep vacation’, I would suggest loading up on one of them to try to the corner (but do not take together — they will disagree with each other). I recalled sleeping 12-14 hrs a day during my second episode from antibiotics for a few weeks, then it stopped.

An alternative would be to use Symbioflor-2, another E.Coli probiotic and slowly work up the dosage – balance the dosage with the amount of sleepiness.

Dry eye: I have had dry mouth, and found that mastic gum cleared it up within a few days (not permanently). A reader provided an interesting comment on an earlier post:

“a treatment I developed for myself decades ago. During my late teens and early twenties I suffered from chronic ear infections. I eventually discovered that if I broke open an acidophilus capsule and left the contents between my cheek and gum overnight after brushing my teeth when I first felt an infection coming on, it would be cleared up by morning. Eventually, after a couple of years, I noticed that I no longer suffered from chronic ear infections.”

CAUTION: With prescription antibiotics, if you stop then the herx effect disappears within 24 hrs. With bioactive antibiotics (i.e. probiotics), a herx can go on for weeks. See this patient experience post and also this post.

As always, this is strictly an informational/education post of items that should be discussed with your knowledgeable medical professional before starting.