This is the third of a series of posts dealing with various forms of cognitive impairment that are often age related. My first posts dealt with Alzheimer’s Disease and Parkinson’s Disease. My personal suspicion is that a significant catalyst (if not actual cause) is the lost of microbiome as we age.

Almost a decade ago, I had a relapse of a condition that I had before and was sent for a SPECT scan. The radiologist suggested that it may be early onset Alzheimer’s. I was having problems with memory then, especially retaining recent memories. In 2017, for the same condition, a patient died and when their brain was examined, this study found

“Among the most remarkable pathological features of the case are focal areas of white matter loss, neurite beading, and neuritic pathology of axons in the white matter with axonal spheroids. Atypical neurons displaying aberrant sprouting processes in response to injury are observed throughout cortical gray and white matter. Abundant amyloid deposits identical to Alzheimer’s disease plaques with accompanying intracellular granular structures are observed as well. Neurofibrillary tangles are also present in the white matter of the frontal cortex, thalamus and basal ganglia. “

For myself, I went into remission. Memory and other issues faded — I am not 100% as strong in some cognitive aspects that I was prior, but to most people they cannot detect the remaining issues.

The condition that I had was successfully treated using a protocol that altered the microbiome. What if this was true for other similar conditions — especially the untreatable ones? Recent literature appears to support this.

A 2011 Study found that Cerebrospinal Fluid Proteomes were different for my condition, a normal population and PTSD. These CFP’s are also heavily studied with ALS ( 2015 Study) ” Ten proteins were differently regulated in ALS CSF compared to controls in at least 2 studies. ” [2017]  – both have novel proteins (i.e. proteins not seen in a healthy population). “We identified significant differences in the CSF proteomebetween living and post mortem ALS subjects, as well as living and post mortem control subjects. We also noted differences in the CSF proteome of ALS subjects that have exhibited symptoms for varying lengths of time and between ALS and Alzheimer’s Disease subjects at end-stage of disease.” [2007]

My working hypothesis is that these CSF proteins are due to microbiome disruption. This disruption may not be a magic bacteria that causes it, but due to undersupply or oversupply of metabolites causing epigenetic changes in the bacteria resulting in these new proteins. Unlike both Parkinson’s Disease and Alzheimer’s disease, I could not find any studies of ALS and Bacteroides fragilis with humans. But with ALS mice (G93A), we see that in studies. 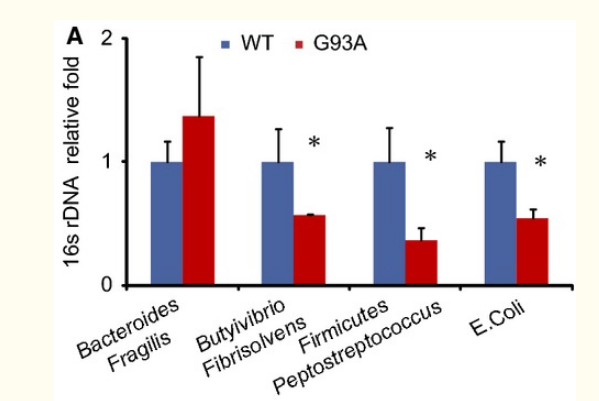 You may wish to read  my Reducing bacteroides fragilis

The hypothesis implies that there would distinctive shifts in bacteria seen with AD. What does the literature say?

If you are a carer for someone with amyotrophic lateral sclerosis, you may wish to get a 16S analysis done ( for example uBiome.com – < $100) and upload the results to http://microbiomeprescription.com/. The suggestions there are based on hundreds of studies of what shifts different members of the microbiome. It’s a free site and the information is not available easily any wherelse.

An example of getting suggestions is shown in this post.

I have updated the ALS Microbiome template on that site, i.e.

Look at the suggestions and discuss them with your treating physician.