Patient “M” has had progressive deterioration over 8 years with a single respite caused by the first of three fecal transplants. The relief lasted for only a few weeks.  To quote their own words:

The extreme severity of the condition combined with acknowledging:

The goal of this post is try modelling the current state and thus the best path forward — suggestions to discuss with their health professional, not guaranteed solutions. Does the patient has Chronic Fatigue Syndrome — I really do not care, they have a gut dysfunction, a severe deteriorating dysfunction.

The simplest model is that a particularly virulent infection has became established in the mouth. Bacteria produces toxins against other bacteria and this bacteria toxins (sometimes called antibiotics – which is what they are) seems very effective against normal healthy bacteria. Usually evil bacteria tolerate each other, that is, are often immune to the toxins of each other. It is simple a case of like supporting like. This bacteria encouraged the settlement of other bacteria (the model of this one bacteria being out of control and being the sole source is naive – there is a shift across dozens of bacteria, some reduced, some increased).

Which bacteria could it be? I haven’t a clue, and likely no amount of testings will currently reveal it:

“Cultural studies indicate that more than 500 distinct microbial species can be found in dental plaque. However, molecular methods of 16S rDNA amplification reveal an even more diverse view of the subgingival bacterial flora and suggest that a large proportion of even this well-studied and familiar microbial environment remains uncharacterised.” [2005]

There is a criteria that can be tested for and which branches the route taken:

Unless you take an extremely aggressive healthy probiotic (if one exists), it is unlikely that will dislodge the evil bacteria. The most probable path is to “nuke” the bacteria and then aggressively resettle afterwards. My usual path of encouraging the good and discouraging the bad may need to be abandoned for severe cases.

So, the suggestion for a game plan is to hit the infection hard first; perhaps seeing a Jarisch Herxheimer reaction (herx).  If a herx occurs, then wait until it weakens, switch to another anti-pathogen agent  and repeat. This was the path that I did with my 2nd round of CFS – I was in a state of herx for 6 out of 8 hours after each antibiotic (which was taken every 8 hours..). When the antibiotics did not produced it, I used potenators-fibrinolytic (see below) and biofilm breakers to increase the herx. Once a herx cannot be produced by any herb/splice/antibiotic then it is time for the probiotics.

Patient  “M” does not recall herxing from anything, Nystatin, Erythromycin, Mutaflor- with the possible exception of Allicin (from garlic)

The pattern appears to be that natural antibiotics did not impacted the evil bacteria but may have reduced some of those that kept them in check.

The first goal is to try for a herx — simple as that, alternatively, because we have a visible symptom, a fuzzy tongue, would be improvement of that symptoms. In general, 4 days on an anti-pathogen is sufficient to produce a herx, if one is likely to happen.

Getting long term antibiotics, especially different ones in rotation, is getting harder and harder to have prescribed. I have known desperate people in the US who have exploited animal antibiotics (especially for dogs and cats) which do not always require prescriptions if done mail order[sample site that requires a prescription]  out of frustrations with MDs. It is not a recommended approach.

My preference would be using the Jadin/Pasteur Institute schema of rotating antibiotics as a starting point.

A uBiome report on the mouth bacteria may provide guidance for further antibiotics, but as stated above — the bacteria could in the uncharacterized biosphere.

Since the origin is assumed to be the mouth, extra focus needs to be on this, in terms of conventional medical treatment (see below for teas/rinses)

At this point we have a decision point: is this the classic CFS Dysfunction with the typical shifts in certain families or is it “bacteria gone wild!”

To the above add the CFS herbs

The suggested flow is shown below: 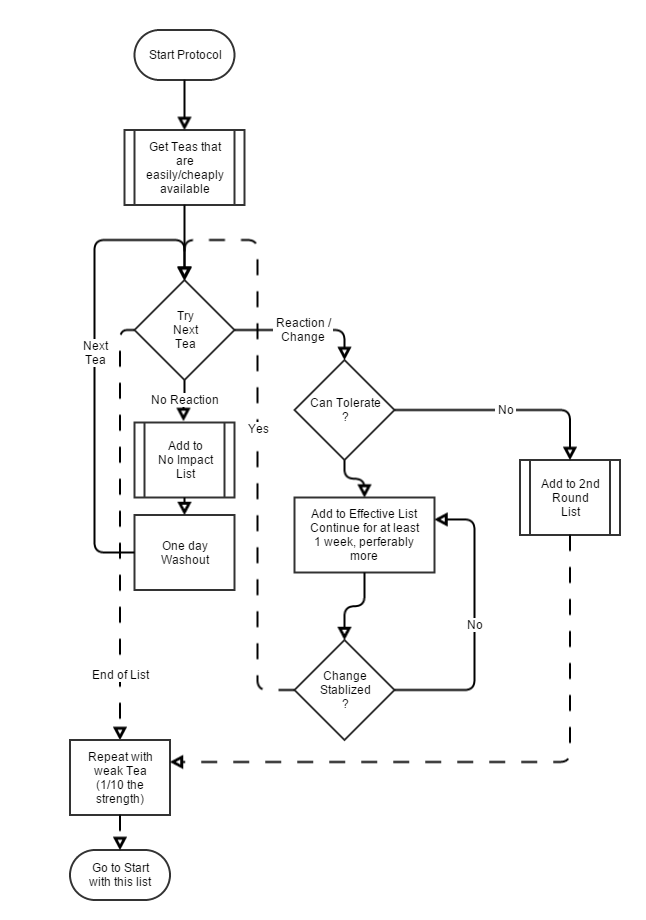 The best starting point may be those that are easily available as teas — because there is likely a reserve in the mouth. Assuming the fuzzy tongue is a symptom of the main infection, you would want a few days drinking a lot of one tea to see if it makes any difference (visual on the tongue or otherwise). Teas are effectively water based extracts. This should be done as a systematic trial and error — recording results. Do not try everything at once — it is slow and systematic, taking notes constantly.

I know for myself, we have found many as teas in Indian, Chinese or Russian Groceries at very reasonable prices (assuming you don’t mind the packaging being in Polish, Russian or Hindi). Eastern European suppliers often have much lower costs that is reflected on shelf prices when being sold to immigrants from those countries.

The reinforcements are items that increase the effectiveness of anti-pathogen agents.

” Bacterial biofilms cause chronic infections because they show increased tolerance to antibiotics, desinfective  chemicals and resist phagocytosis and other components of the defense system of the  body” [2009]

A few human bacteria that uses biofilms [2005] include:

In short, you should assume that biofilms is a major defense mechanism and make sure you are taking supplements to break them down.