A long time (almost 2 decades) CFS friend got his microbiome done by ubiome.com. I will be writing some more posts on his ubiome and history, but to get things started I want to look at the subset that have high Blautia.

As with most CFS patients, there is a relative lower level of Firmicutes — here it is under 62% are Firmicutes (ME/CFS averaged 58%, healthy controls 65% — see this post). “We observed that bacterial diversity was decreased in the ME/CFS specimens compared to controls, in particular, a reduction in the relative abundance and diversity of members belonging to the Firmicutes phylum.” [2016]

Moving down to the Genus level we see similar to some other patients (see this post), especially the high Blautia — also seen with Patients “R” and “Q” See below. Other CFS patients had just 2-5%. 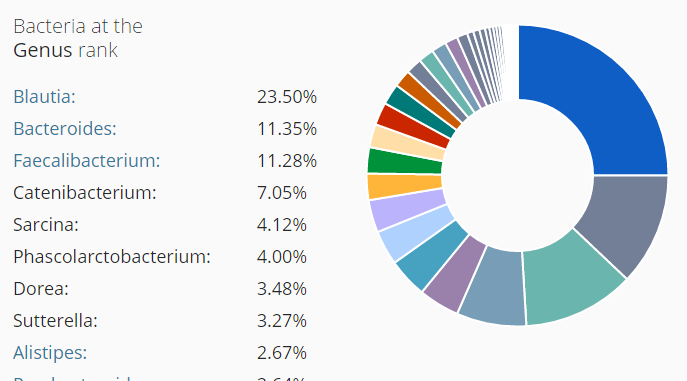 Blautia genus (under Bacteria; Firmicutes; Clostridia; Clostridiales; Lachnospiraceae) has become a dominant Genus and consist of dozens of species. Note that it was classified under “ruminococcus”(by appearance) until RNA studies found that while it looks alike but was different. In italic and red are items to avoid, bold are items to take.

There was a number of common things between this post decreasing Blautia and the last post increasing Clostridium XIVa.

On the other side, we saw study after study that lactobacillus probiotics increases blautia.