The title sounded grander than what it actually contained

Results support the notion that specific microorganisms interact with some ME/CFS symptoms and offer promise for the therapeutic potential of targeting gut dysbiosis in this population. Streptococcus spp. are not the primary or sole producers of d-lactate. Further investigation of lactate concentrations are needed to elucidate any role of d-lactate in this population. Concurrent microbial shifts that may be associated with clinical improvement (i.e., increased Bacteroides and Bifidobacterium or decreased Clostridium in males) invite enquiry into alternative strategies for individualised treatment.”

The role of staphylococcus was known in 2015, and I did a post on it in January  2016. The d-lactic aspect, I posted about in 2015 in this post Approaches to D-Lactic Acidosis.

What they appear to miss was streptococcus causing histamine issues, see this 2014 post,  Histamine intolerance – a possible CFS mechanism.

It was interesting to note that there was no attempt to reduce streptoccocus by diet etc. The suggestions from existing literature are on the ubiome analysis site. A small example:

The choice of Erythromycin is a bit of a puzzle, because of increasing resistance of many streptoccocus to this antibiotics. I pointed this out in my 2017 post, Reducing Streptococcus genus  where I cited this study

They did find that shifts of bacteria did result in improvement of symptoms — which is exactly what I expected to see. 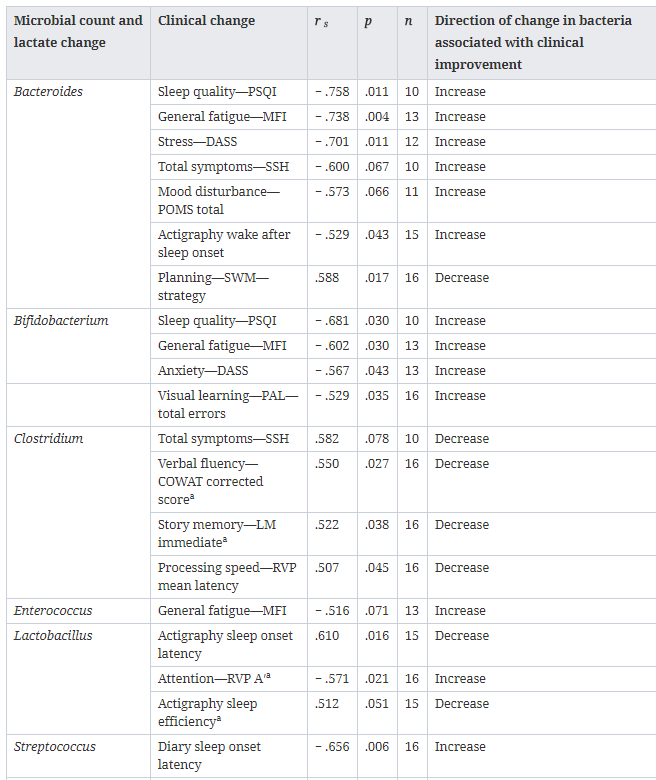 This study supports and illustrates the basics  of my model. If you are not too brain fogged, it is an interesting read. Their approach seems a little simplistic, but they did obtain good results.