It seems that every two years, I get requests to review this probiotic. It is neither worth the money and has the appearance of many false claims. See earlier posts:

Current state of knowledge based on PubMed articles. At present there are around 67 articles on GCMAF (which is available separate from the Bravo Probiotic). 41 of these were associated with CANCER. 65 was associated with Vitamin-D (i.e.improve uptake of vitamin D)

There are NO studies for the microbiome or IBS  or Crohn’s Disease or fibromyalgia, etc. Add to this that many published fake-papers associated with fake institution that have been exposed recently — it raises HUGE ALARM BELLS of con-artists taking money from the desperate sick.

Checking the promotion sites I see that it is alleged that it’s GcMAC may cures depression, autism [not a single study to support that claim]. Their site claims ” inflammation, from infections, inflammation, virals and immune diseases” with a massive number of alleged presentations and papers… none dealing with GcMAC as a probiotic, and many citing the discredited Yamamoto exposed above. Their publications page stop in 2014 – at the same that the fake organizations cited above were exposed.

Doing some digging around, I found that the current manufacturer is “Silver Spring Sagl”, c/o Fulvia Gianetta Allio via Raimondo Rossi 24, 6864 Arzo – founded in 2015. Owned by Marco Ruggiero MD.

The cost for alternative probiotics is likely $500/year of less. 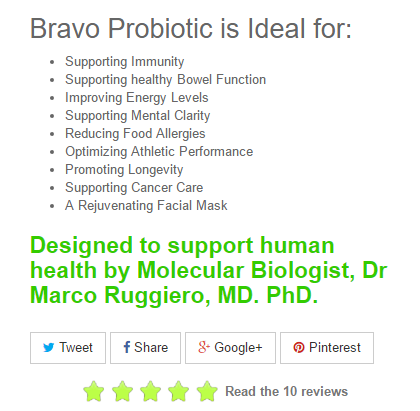 With none of the above claims supported for Bravo exclusively by PubMed. Those claims are supported for certain strains of the families of bacteria cited above —  that evidence cannot be applied to unidentified strains.